The Story of The Schizophrenia Society of Canada

Build a Canada where people living with early psychosis and schizophrenia achieve their potential.

The Schizophrenia Society of Canada (SSC) was started as a non-profit, charitable organization in Toronto in 1979 by Bill Jefferies and his wife who had a son living with schizophrenia. Within a few years there were provincial schizophrenia societies across Canada. As parents and caregivers they were quite aware of the stigma, prejudice, and discrimination associated with schizophrenia, one of the world’s most devastating mental illnesses.

Their lived experience as family members fueled their passion and vision that more could be done, not only those living with schizophrenia, but also for families.  Families had no voice. Thus, the SSC’s mission had a strong emphasis on advocacy, which remains to this day.

Later the mission was enhanced by emphasizing that with adequate access to medical treatment the quality of life could be improved for those living with schizophrenia. The emphasis to garner public awareness and support, as well as to advocate for policies that would create better mental health services, was greater than ever.

Today, SSC has a strong conviction that things can definitely be different and better for those experiencing early psychosis and for the one in one hundred who will develop schizophrenia. Significant advances in our understanding of mental illness and treatment modalities, alone with early intervention and access to person-centred and recovery-focused mental health services, have demonstrated that there is life after a diagnosis of early psychosis and schizophrenia! Tailored mental health services and supports for individuals can help them to live beyond the limitations of their mental illness with purpose, hope, meaning, and significance. But it takes the support of a caring community. Recovery and social inclusion are the goals today.

Not only must the voices of families be heard, but the voices of those who actually live with early psychosis and schizophrenia must be acknowledged. Back in 1979, recovery was not seen as possible. A diagnosis of schizophrenia was seen even among service providers as a “death sentence.”

Peer support, both for individuals and for family members, is a growing movement today. Through peer support we have learned that a diagnosis is not one’s identity, but a label. While medication is most important and plays a definite role, recovery involves more than medication. There are five things that all people need in their lives, no matter who they are, how old they are or where they’re from, no matter their diagnosis. They are known as the CHIME factors: 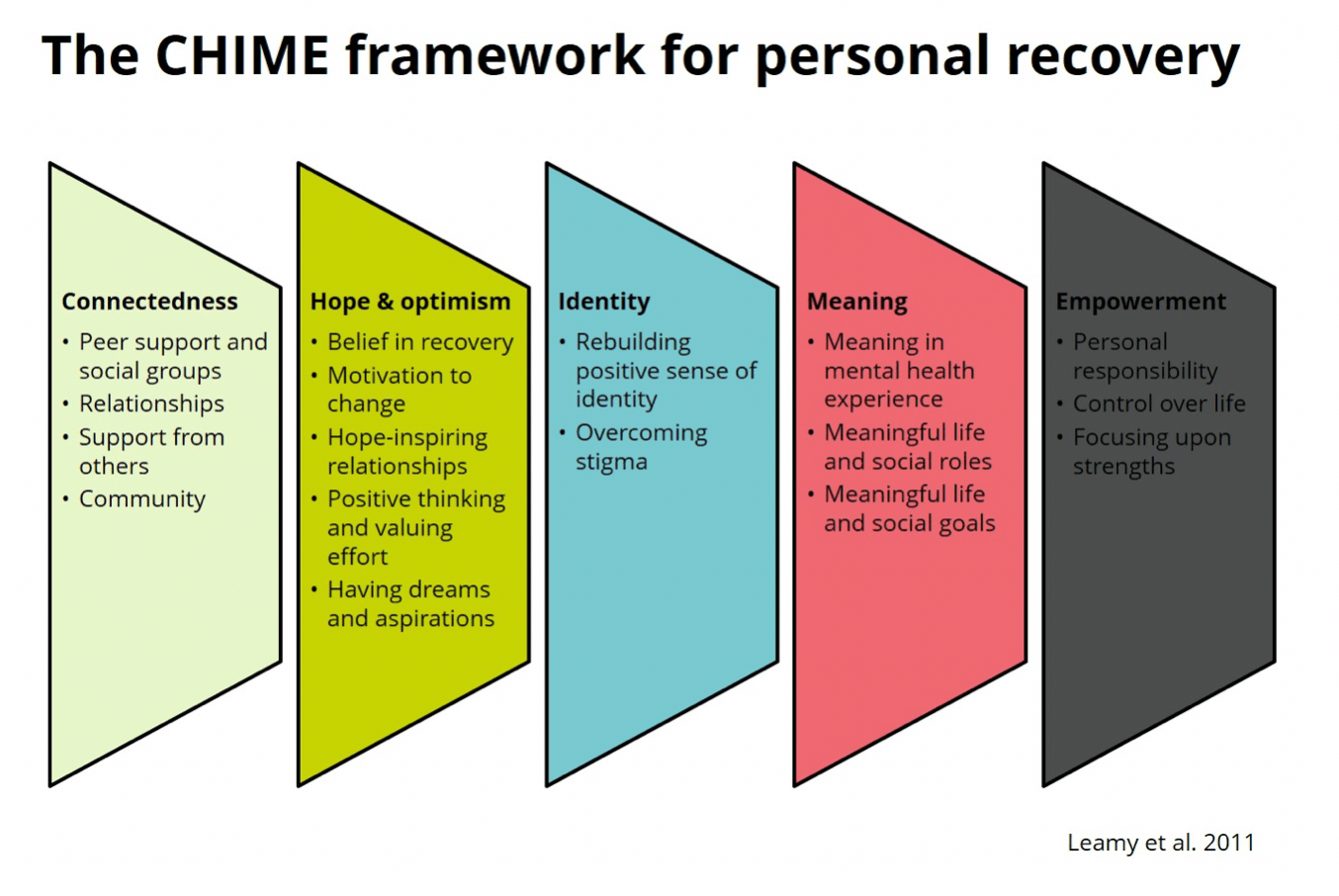 SSC is committed to transforming how people think, with knowledge and youthful enthusiasm. We seek to be an inspirational visionary in advocating for a transformed mental health system that is based upon the recovery philosophy.

An environmental scan performed in 2017 by SSC indicated that our stakeholders wanted to see more hopeful messages and an emphasis on “the whole person.” As can be read in the document released by SSC in 2020, “Hope and Recovery: Your Guide to Living with and Beyond Schizophrenia,” mental health services must address the biomedical, psychosocial, psychological, and environmental issues individuals face so that devastation and suffering can be eradicated.

While many with severe schizophrenia will need intensive care and will not experience what is known as recovery, the possibility and potential for recovery still exists. All must be seen and treated as persons with potential rather than as an illness themselves, not as a mere cluster of symptoms to be reduced. Today we know that people living with a mental illness can achieve positive mental health.

The Schizophrenia Society of Canada’s mission, goals, and objectives are informed by the following core values:

Your mental illness does not define you. Your strength and courage does.